In this tutorial you will setup a Photopia analysis for an assembly that already exists. This is based on an LED TIR Collimator lens using a CREE XP-L LED that creates a narrow beam. 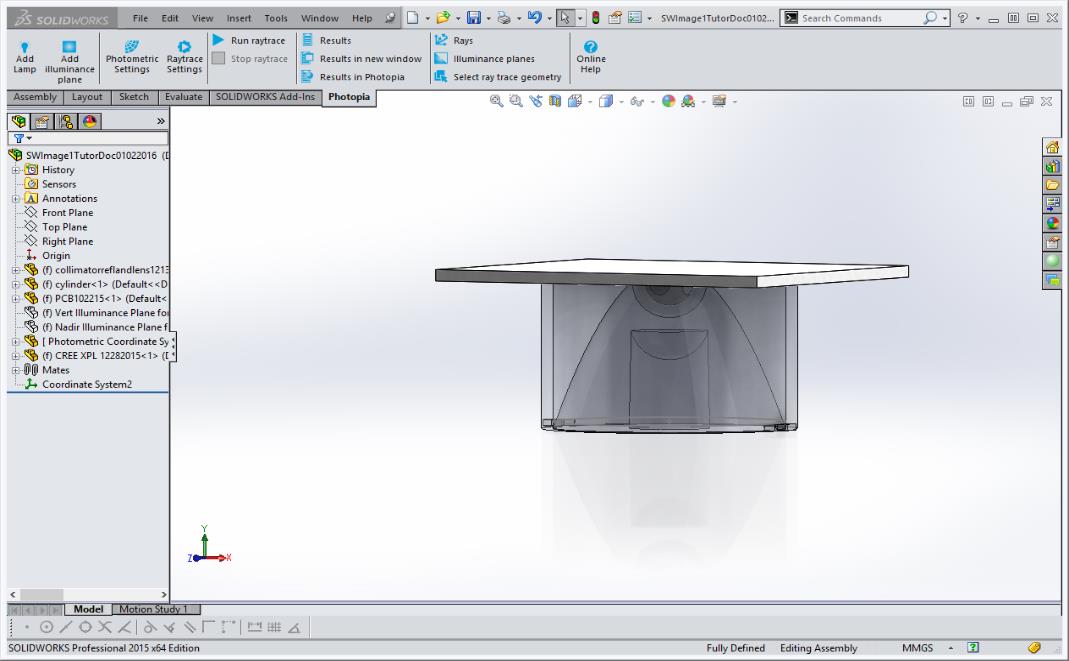 Start SOLIDWORKS and click File > Open and browse to:

and open the “LED Collimator.SLDASM” assembly.

This assembly model includes a collimator lens, lens holder, PCB and an LED. 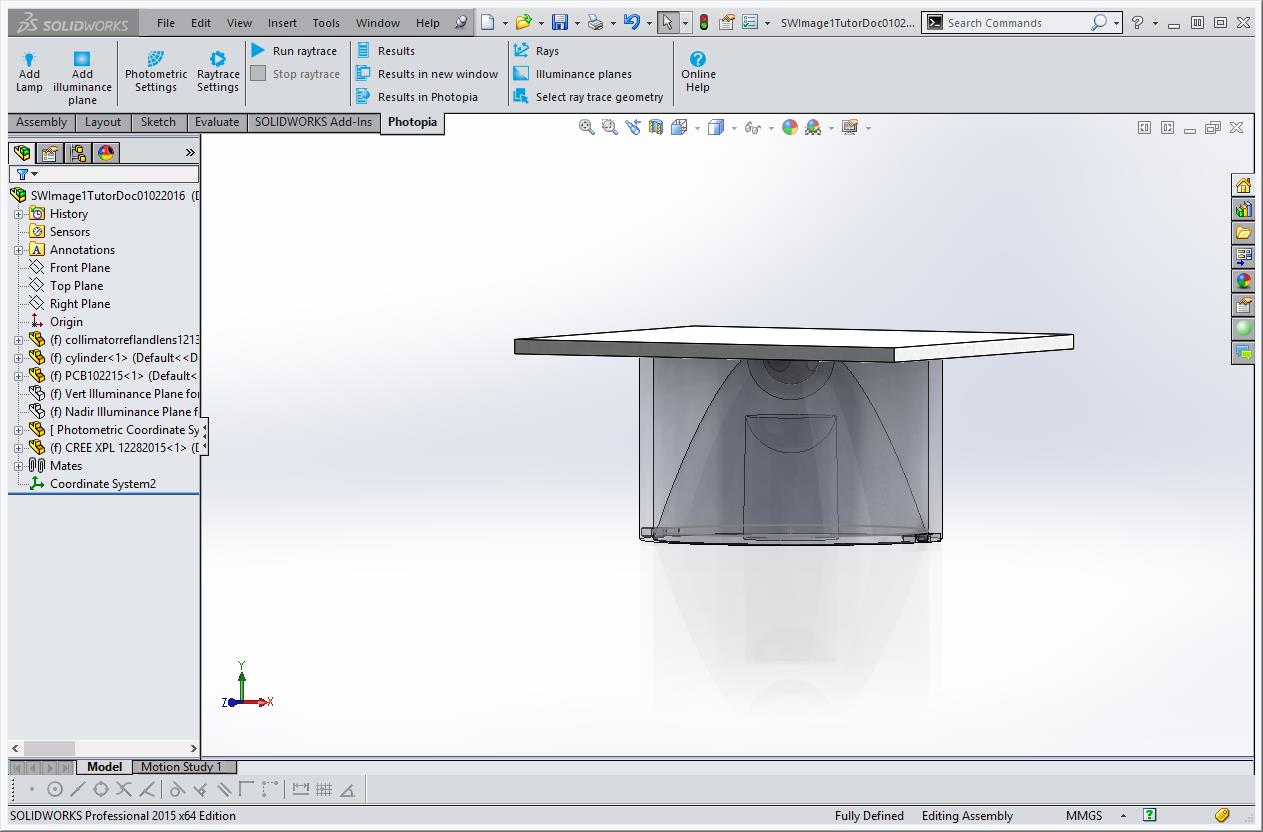 Typically, you will already have some mechanical geometry for you lamp, which is also the case in this assembly. There is a part that was created from the CREE XPL 3D.STP file on CREE’s website.

You’ll need to import the Photopia lamp model from our library in order to run an analysis.

Under Lamp: Select a lamp, use the drop down to find the XP-L-3000KCORE lamp. You can also click Browse lamps to see more information or search by keywords.

You can adjust many of the lamps properties, including lamp lumens and electrical power. For this example, you will just accept the default lamp properties.

You can also mate the lamp to a coordinate system if you had already set one up. In this example we haven’t, so you won’t specify a coordinate system. The Photopia lamp model’s origin point will be placed at 0,0,0 in your assembly file in the default orientation. 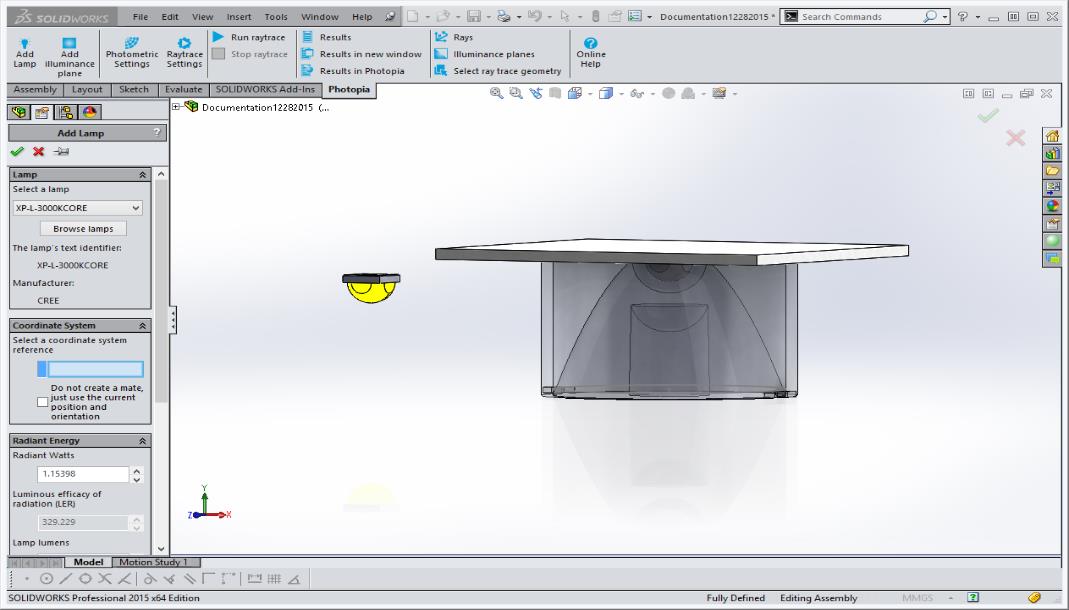 Hide the PCB and cylinder parts so it is easier to see the LEDs.

You will see that the Photopia lamp model (the one with the yellow dome) isn’t oriented correctly with respect to the lens.

One way to get it oriented and located properly is to mate it with the reference LED geometry that was already in the assembly. Perform this mate so that the Photopia Lamp Model (with the yellow dome) will re-orient to match the proper orientation. 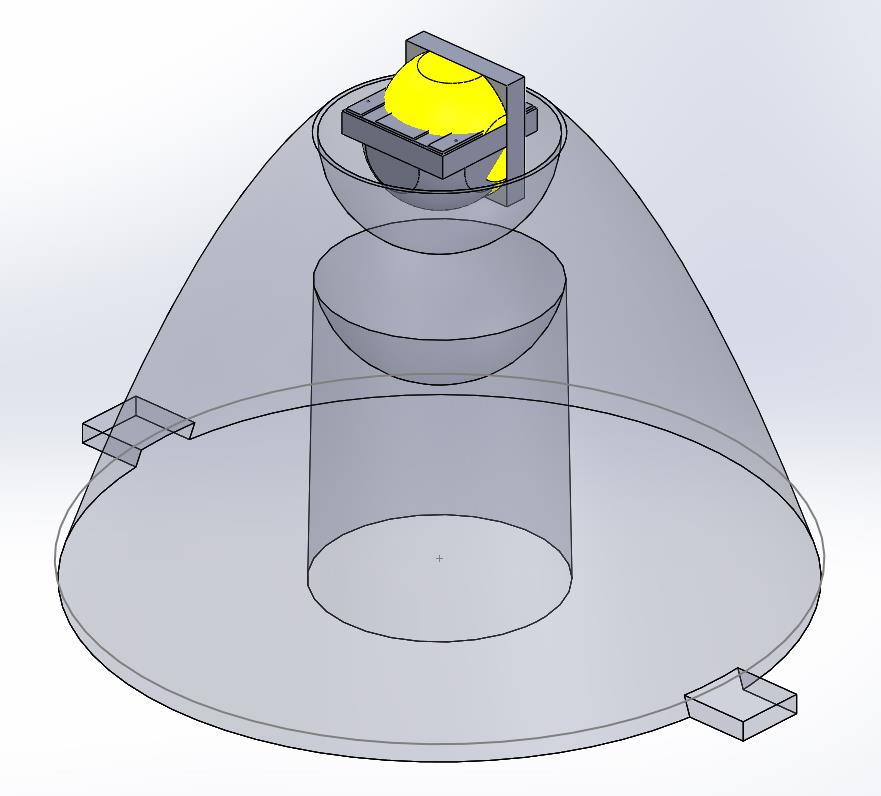 Optical material properties are assigned using special Photopia appearances that are installed with the add-in.

You will assign a material to each part, and this will be assigned at the assembly level, not changing the part document.

Find the IDI 44-10 White TR-2 white reflective material (typing into the search box is the easiest way to find materials). Click on the material and then drag it over into the FeatureManager (FM) tree and drop it onto the cylinder part.

Find the Generic White PCB white reflective material. Click on the material and then drag it over into the FM tree and drop it onto the PCB Part.

Find the Generic ACRYLIC1 refractive material. Click on the material and then drag it over into the FM tree and drop it onto the Collimator part. 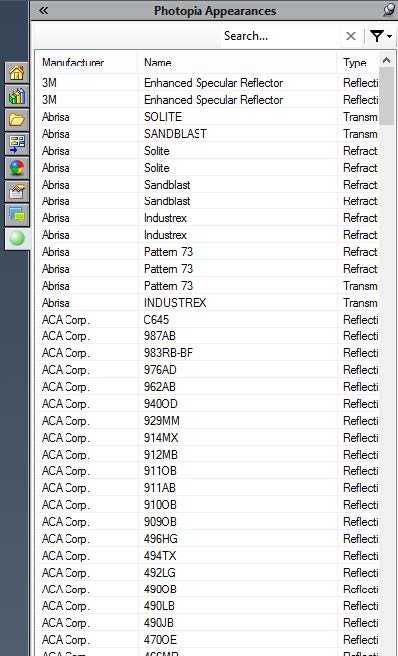 You can also drag appearances onto items in the Model View, and you’ll have the option to assign that appearance to the face, body, part, or part @ assembly.

You can also select a part, body or face and then double click the appearance to assign it.

Ultimately you can use whichever method you prefer.

Click Insert > Reference Geometry > Point and choose Center of Arc and click the arc (circle) in the center of the collimator shaft shown below.

Click Insert > Reference Geometry > Coordinate System . Choose the point that was just inserted as the Origin for the coordinate system. Then click in the Z axis selection box and select the top face of the Collimator PCB to orient the Z axis upwards.

Select the reference coordinate system you just created and click Photometric Settings from the Photopia tab in the CM. Since the output of this lens is essentially axially symmetric downlight, set the Horizontal Test Angles to 0 and the Vertical Test Angles to 0(2.5)90. You can also set the Test distance and Luminous dimensions here as well, but can accept the defaults for this example. You will also see the photometric sphere as a wireframe in the correct orientation and centered at the lens opening. 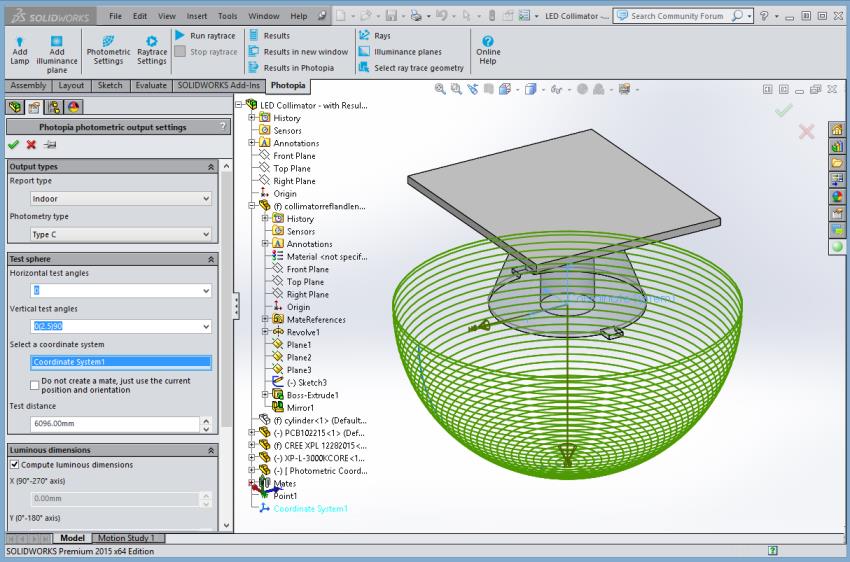 Select Raytrace Settings. This is where you can enter the # of rays & reactions. The defaults will be good for this project. 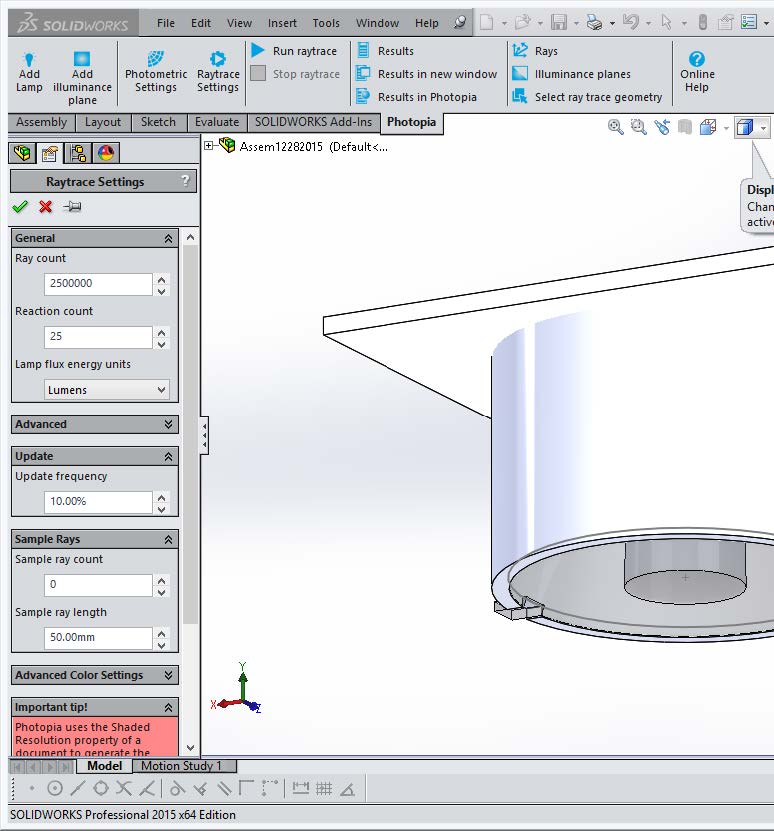 Photopia gets a mesh version of the solid from SOLIDWORKS. If your optic is detailed or small the default mesh may not have adequate resolution and you'll need to request a better mesh from SOLIDWORKS.

Our User's Guide has detailed descriptions of all settings.

Click the Results button to view the status and results. You can also open the results in a separate window so that you can still interact with the model. 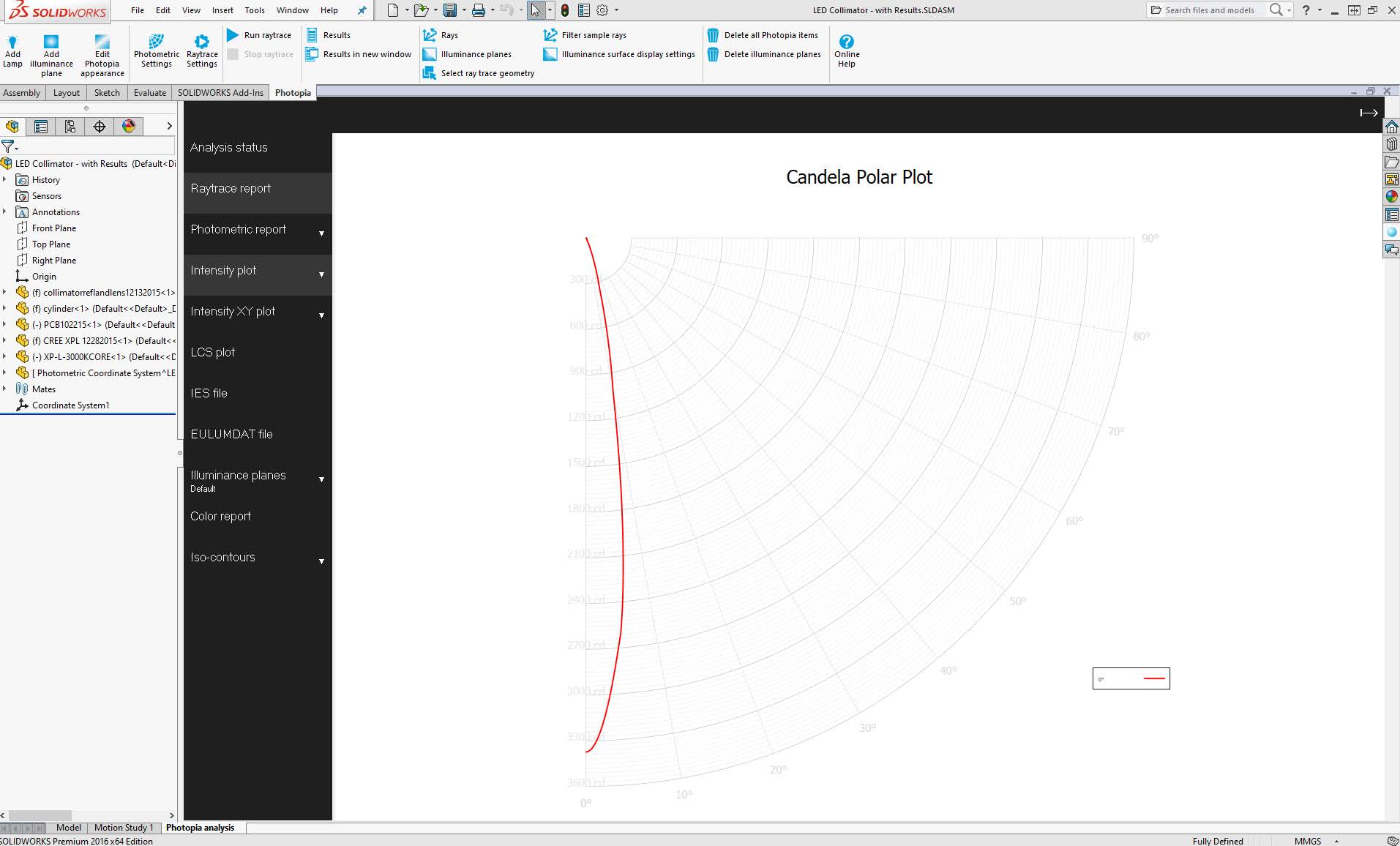 Being able to see the light onto a surface is helpful for evaluating the performance of many optics. Illuminance planes can be assigned to any rectangular planar face and are added to the SOLIDWORKS assembly file as components (part files). This Assembly already has a rectangular face that you use to create an illuminance plane.

Click the Add illuminance plane / Add Recording Plane button on the Photopia CM tab. Select the surface in the Illuminance Plane / Recording Plane part and be sure that the arrow is facing up toward the optic. If not, then check the Flip Normal checkbox to reverse it. You can adjust the grid parameters, but leave them at the default for this project. 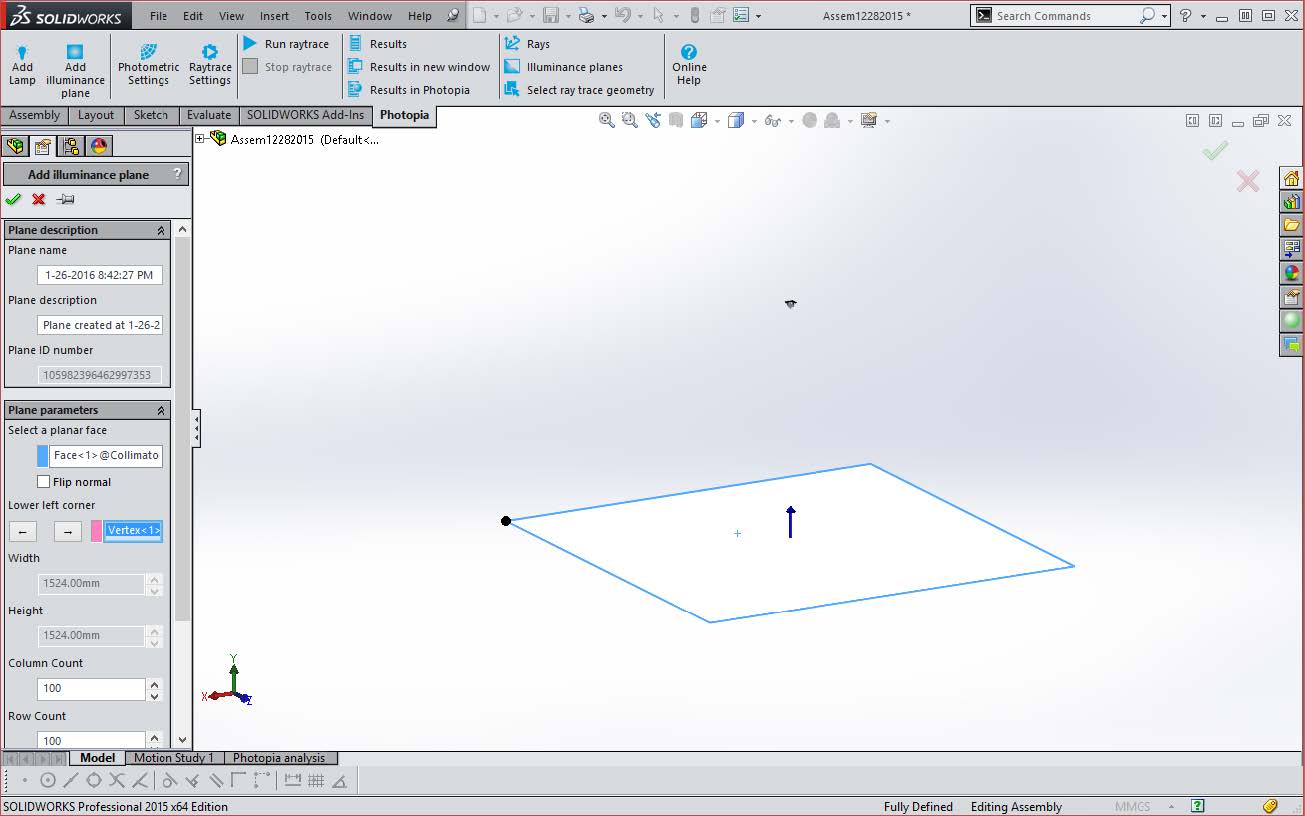 Click Run Raytrace to rerun the raytrace with the Illuminance Plane in the model.