This tutorial describes how to configure a simulation in SOLIDWORKS to produce a luminous image of an optic. This is done by placing a smooth spherical lens and aperture between the object to be imaged and an illuminance plane (projection plane). The tutorial recommends the lens and aperture parameters that produce a good quality (focused) image.

If you need to review the basics of Photopia for SOLIDWORKS, then start with the SOLIDWORKS Beginner Tutorial.

This image shows 3 LEDs on the left that are imaged onto the projection plane on the right.

Based on the general guidelines to the right, you'll fill in the spreadhsheet to determine the parameters to use for the smooth lens in Step 4.

Save the part as “Smooth Lens”.

The lens profile will be created in the current sketch plane.

Click the “Spherical lens” icon on the Photopia CommandManager.

Enter the following lens parameters based on the Worksheet from Step 1:

Any description for the part.

The following are specified for each side of the lens:

The options are convex, concave of plane. The first interface is drawn on the -X side of the profile in the sketch plane.

If convex or concave is selected, then this specifies the radius of the feature.

The width of the annulus feature, which is a flat flange around the circumference of the lens.

The diameter of the entire lens, including the annulus.

The center-to-center thickness of the lens, enter 0 for the lens to be constructed as thin as possible.

The minimum thickness of the lens, overrides the Lens center thickness.

Click OK ( ✔ ) to create the Smooth Lens, whcih will insert the Revolve Boss/Base Feature into your part. 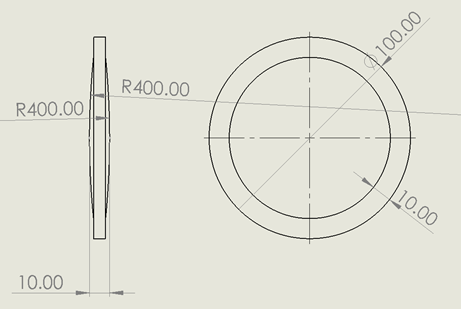 An aperture will be used to ensure only light that interacts with the lens hits the projection plane. The aperture hole size is based on the Worksheet in Step 1.

In a new part document, create an aperture, either as a surface or thin solid.

Assign the ZERO0000 reflector material to this part, which has a reflectance of 0%.

Save the aperture part. 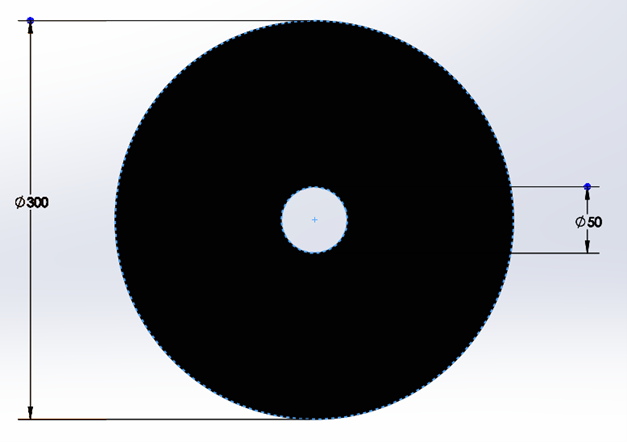 You will create an illuminance plane that receives light through the smooth lens and is a projection of the luminous view of your luminaire. The plane size should be large enough to capture the full image of the object being imaged and have a grid resolution based on the level of detail required in the luminous view.

For this example, the plane size is set to be 200mm x 200mm to provide some padding around the object image. This project uses a high grid resolution or 800 x 800, which is a 0.25mm resolution. This high resolution will require more rays to be traced.

For help creating an illuminance plane, you can view step 9 of this tutorial.

Save the projection plane part.

Projected images require a relatively high number of rays since many of the emitted rays don’t pass through the imaging lens and contribute to the image. It is therefore common to use 100 million rays or more to produce good quality images depending on the model parameters. Because of this, there is an incentive to minimize the model complexity. If you therefore have a model with a repetitive luminous appearance, we recommend modeling only a small section of the overall optic to confirm the luminous qualities of the feature of interest. For example, if evaluating whether individual LEDs are seen through a diffusing lens, then only a small set of the LEDs needs to be simulated rather than all LEDs in the entire device. 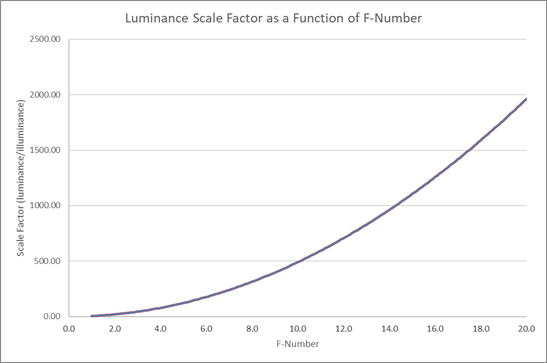 This plot shows how the luminance scale factor values vary as a function of the projection system F-Number. See the spreadsheet for specific values.

The luminance values produced with this process will be an average over the field of view (FOV) of the image projection system. The FOV is defined as the full angle subtended by the aperture from the focal point of the object. For an F6.0 system, the FOV is 4.77°, so light is captured by the lens from an angle of about 2.4° above and below the optical axis (center line through the system). This means the luminance values are being averaged over this range of view angles. For evaluating diffusing lens appearances, this is acceptable since the luminance of the lens isn’t likely to significantly change over such a small range of view angles. Other systems that have luminous properties that do change over smaller angular ranges would benefit from a higher F-Number. Otherwise, the computed luminance values will be less accurate. 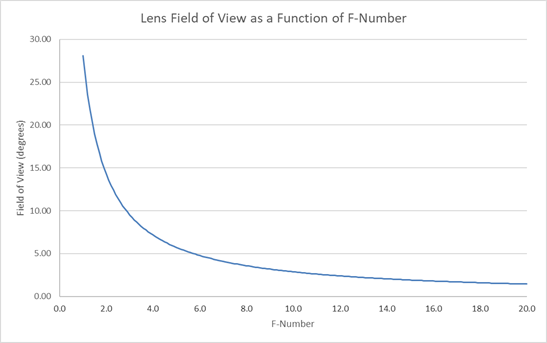